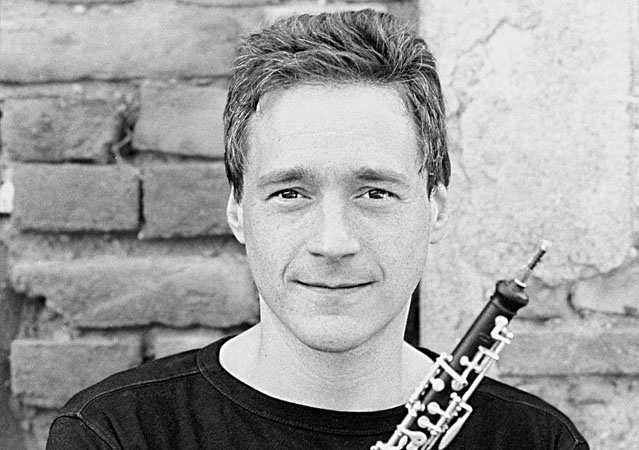 Having trained with Jan De Maeyer, Luk Nielandt and Louis Gilis, Karel Schoofs graduated from the Royal Conservatoire in Antwerp with flying colors. After this training he further developed his skills through masterclasses with Jean-Louis Capezzali and Yván Fisher to name just a few.

Only in his twenties, Karel joined the Royal Flemish Philharmonic until 1996, when he was appointed Principal Oboist in the National Orchestra of Belgium with music directors Yuri Simonov, Mikko Franck and Walter Weller. In 2008 Karel crosses borders to adopt the same position in the Rotterdam Philharmonic, this time working with Valery Gergiev, Yannick Nézet-Séguin and from 2018 Lavah Shani.

He made his debut as solist with his orchestra in 2010 playing Mozart and Bellini. In this respect it is also worth mentioning that in 2014 he performed the Dutch premiere of James MacMilan’s oboe concerto and in 2019 the reconstructed oboe concerto of Van Beethoven with Lahav Shani as conductor. Besides, as a solist he also played with the Chamber Orchestra of Belgium, during the Flanders Festival, in the ranks of the Brabant Orchestra, with the SymphoniaAssai and at the World Expo 2010 in Shanghai, China.

Subsequently, it is no surprise that in the fields of chamber music Karel earned his stripes as well: Oxalys, Quatuor Danel, Combattimento Consort Amsterdam and I solisti are but a few of the ensembles to have taken delight in his expertise and knowledge. Besides, Karel is a founding member of the MP21 ensembles and a regular guest at the renowned events such as the Storioni Festival and the International chamber Music Festival Schiermonnikoog.

In 2007, Karel met harpist Anneleen Lenaerts (Vienna Philharmonic) and they have been a musical duo ever since.

Since 2013 Karel is an oboe Professor at the Royal Conservatoires of Brussels and The Hague, and he regularly gives worldwide masterclasses as well as audition training, from Michigan to Beijing.

Every now and then Karel thinks effortlessly out of the box. He truly enjoyed working on the jazz production ‘Dowland project’ and all the theatre productions like: Rhyming Life and dead (2009), Water Music (2011-2019) and Good Boy-this can’t be it (2018).