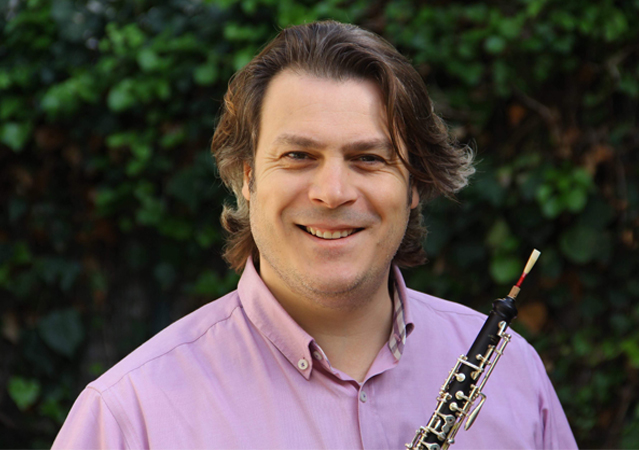 Spyros Kontos was born in Corfu in 1974.

He has studied oboe in Athens with Yannis Papayannis, in Karlsruhe at the Hochschule für Musik with Prof. Thomas Indermühle and in Geneva at the Haute École de Musique with Prof. Maurice Bourgue.

Since 1997 he is principal oboist of the National Symphony Orchestra of the Greek Radio and Television (ERT) in Athens and also holds the same position with the Athens Philharmonic, with which he will appear at the Carnegie Hall in NY in October. His activities include many recitals and chamber music concerts, appearances as soloist and also Radio/TV recordings in most European countries and USA. He has a research interest on the works of the Greek literature for Oboe, while many outstanding composers have written new oboe pieces for him.

He is a devoted pedagogue; since 2012 as assistant of Prof. Thomas Indermühle at Staatliche Hochschule für Musik in Karlsruhe and since 2006 at the International Oboe Course of Corfu. Since 2002 he is responsible for the oboe class (in bachelor and master’s degrees) at the Music Department of the Ionian University in Corfu and also at the conservatory of the Athenaeum Cultural Centre in Athens, also giving master-classes at institutions like the Athens Conservatoire, the MOUSA youth orchestra at Megaron concert hall of Thessaloniki, the youth orchestra of Cyprus, the Louisiana University (LSU) in the USA, the Elaine Kaufmann Centre in New York etc.

His discography includes exclusively works by Greek composers and is available at DNA Label, Centaur, Irida, Rekem and Universal. His album Metamorphosis has been awarded by the Union of Greek Critics and acclaimed by international magazines.  He is a Rigoutat artist, playing a model J and in august 2018 he represented the firma, participating at the IDRS conference in Granada, where he gave a recital.