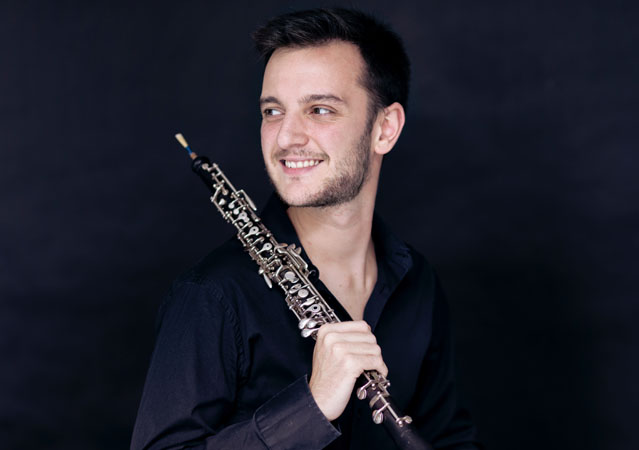 After initial studies in the Conservatory of his hometown (Huesca, Spain), Andrés Otín Montaner joined in 2012 the Hochschule für Musik Karlsruhe, in the class of Thomas Indermühle. During this time, he also took masterclasses from oboists like Jacques Tys, Dudu Carmel, Christian Smith, Kalev Kuljus and Spyros Kontos.

In 2015 he was semi-finalist of the 11th International Oboe Competition of Japan and during and before his graduation he expanded his orchestral experience in the Junge Deutsche Philharmonie, Baden Baden Philharmonie, Orchestre de Chambre de Toulouse and Augsbueger Symphoniker. He also plays regularly with chambermusic ensembles like Gewandhaus Bläserquintett and Neues Bachisches Collegium.

In 2016 he started master studies in the Universität Mozarteum Salzburg whit Stefan Schilli and one year after he won the academy position in the Symphonieorchester des Bayerischen Rundfunks where he played under conducting of Mariss Jansons, Zubin Metha, Simon Rattle, Iván Fischer, Daniel Harding and many others.

In 2019 he won the Solo Oboe position in the Gewandhausorchester Leipzig.

Andrés Otín Montaner has been trusting Rigoutat since 2015.